A Florida teenager who served as a lackey for a cybercriminal group that specializes in cryptocurrency thefts was beaten and kidnapped last week by a rival cybercrime gang. The teen’s captives held guns to his head while forcing him to record a video message pleading with his crew to fork over a $200,000 ransom in exchange for his life. The youth is now reportedly cooperating with U.S. federal investigators, who are responding to an alarming number of reports of physical violence tied to certain online crime communities. 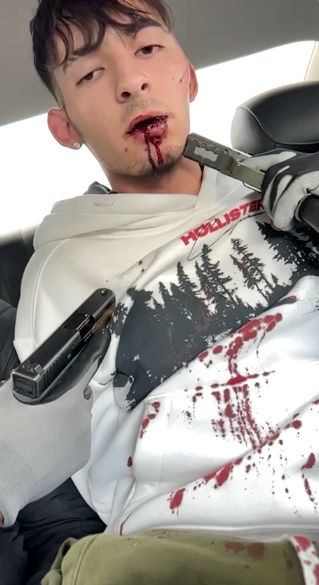 The SIM-swapper known as “Foreshadow” pleading for his life.

The grisly kidnapping video has been circulating on a number of Telegram chat channels dedicated to SIM-swapping — the practice of tricking or bribing mobile phone store employees into diverting a target’s phone number, text messages and calls to a device the attackers control.

The teen, known to the SIM-swapping community by the handle “Foreshadow,” appears to have served as a “holder” — a term used to describe a low-level member of any SIM-swapping group who agrees to carry out the riskiest and least rewarding role of the crime: Physically keeping and managing the various mobile devices and SIM cards that are used in SIM-swapping scams.

“Yo, Dan, please bro send the 200k,” Foreshadow said in the video, which was shot on Sept. 15 in the backseat of a moving car. Bleeding from a swollen mouth with two handguns pointed at his head, Foreshadow pleaded for his life.

“They’re going to kill me if you don’t,” Foreshadow continued, offering to get a job as a complicit mobile store employee or “plug” to help with future SIM-swaps. “I’ll pay you back. Just let me know what you need. I got you, for real. Any work for free. Whatever. However long you need me, too. I’ll apply to any store you need me to apply to. I can be a plug. I don’t care if I get caught by the cops or anything. I’ll get that money back for you. I used to do that work.”

It’s not clear where in the world the hostage video was recorded. But at one point in the video, the vehicle’s radio can be heard in the background mentioning WMIB, which is a hip-hop station in South Florida that serves both Ft. Lauderdale and Miami.

JUST IN: FORESHADOW IS NOT DEAD!!!!

IF YOU HAVE CHATS WITH HIM CLEAR THEM

Foreshadow appears to be a teenager from Florida whose first name is Justin. Foreshadow’s main Telegram account was converted from a user profile into a channel on Sept. 15 — the same day he was assaulted and kidnapped — and it is not currently responding to messages.

Foreshadow’s erstwhile boss Jarik told KrebsOnSecurity that the youth was indeed shot by his captors, and blamed the kidnapping on a rival SIM-swapper from Australia who was angry over getting shortchanged of the profits from a previous SIM-swapping escapade.

The FBI did not immediately respond to requests for comment.

Foreshadow’s experience is the latest example of a rapidly escalating cycle of physical violence that is taking hold of criminal SIM-swapping communities online. Earlier this month, KrebsOnSecurity detailed how multiple SIM-swapping Telegram channels are now replete with “violence-as-a-service” offerings, wherein denizens of the underground hire themselves out to perform various forms of physical violence — from slashing tires and throwing a brick through someone’s window, to conducting drive-by shootings, firebombings and home invasions.

On Aug. 12, 2022, 21-year-old Patrick McGovern-Allen of Egg Harbor Township, N.J. was arrested by the FBI and charged with stalking in connection with several of these violence-as-a-service jobs. Prosecutors say the defendant fired a handgun into a Pennsylvania home, and helped to torch another residence in the state with a Molotov Cocktail — all allegedly in service of a beef over stolen cryptocurrency.

Earlier this month, three men in the United Kingdom were arrested for attempting to assault a local man and steal his virtual currencies. The local man’s neighbor called the cops and said the three men were acting suspiciously and that one of them was wearing a police uniform. U.K. police stopped the three men allegedly fleeing the scene, and found a police uniform and weapons in the trunk of the car. All three defendants in that case were charged with “intent to cause loss to another to make an unwarranted demand of Crypto Currency from a person.”

Dina Temple-Raston and Sean Powers over at The Record recently interviewed several members of the SIM-swapping community about this escalation in violence. That story is also available on the Click Here podcast — Throwing Bricks for $$$: Violence-as-a-Service Comes of Age.

from Krebs on Security https://ift.tt/bij9AG3
via IFTTT